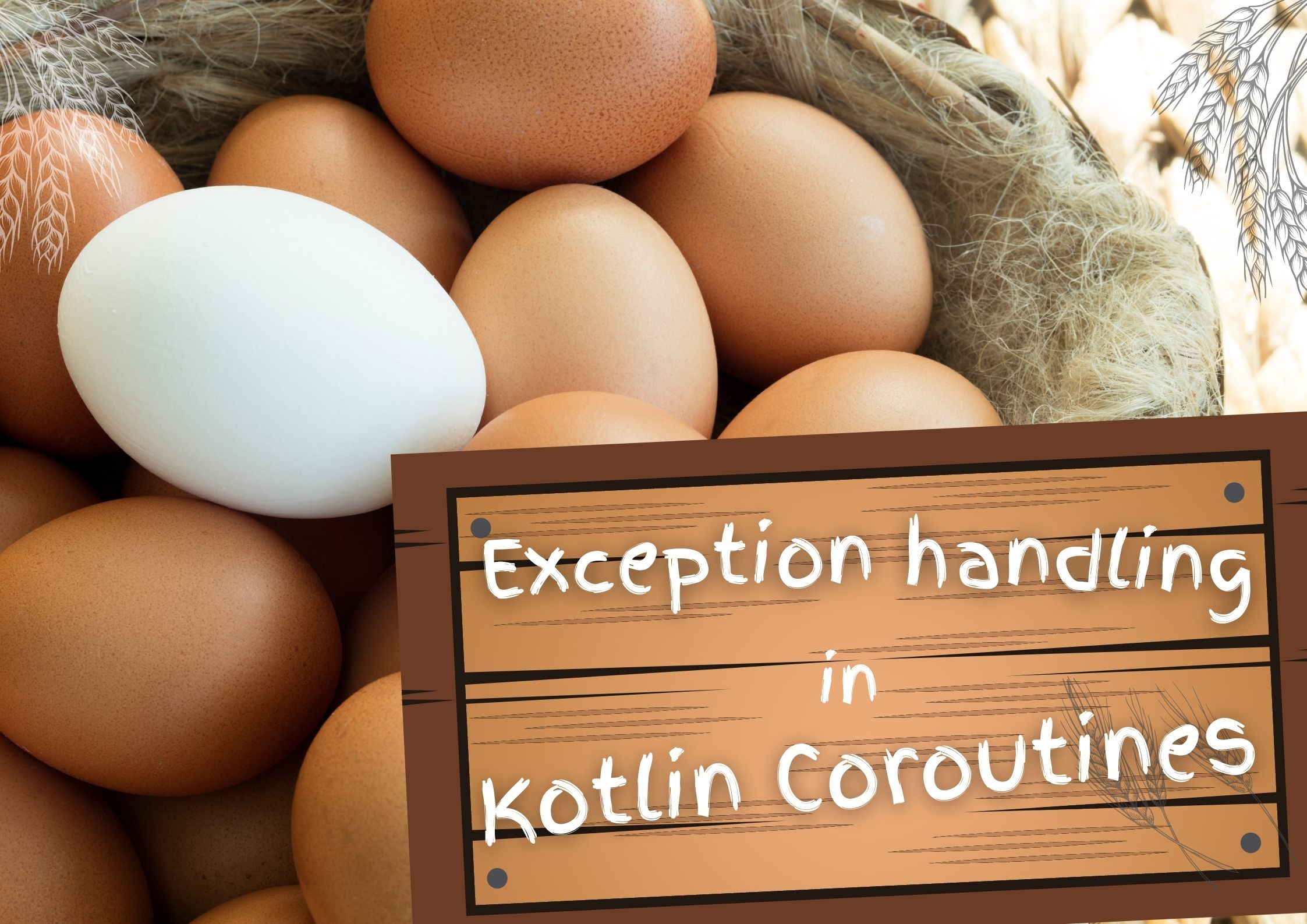 A very important part of how coroutines behave is their exception handling. Just like a program breaks when an uncaught exception slips by, a coroutine breaks in case of an uncaught exception. This behavior is nothing new, for instance, threads end in such cases as well. The difference is that coroutine builders additionally cancel their parents as well, and each cancelled parent cancels all its children. Let's look at the example below: once a coroutine gets an exception, it cancels itself and propagates the exception to its parent (launch). The parent cancels itself, all its children, and propagates the exception to its parent (runBlocking). runBlocking is a root coroutine (has no parent), so it just ends the program (runBlocking rethrows the exception). Adding additional launch coroutines wouldn't change anything. Exception propagation is bi-directional: the exception is propagated from child to parent, and when those parents are cancelled, they cancel their children. This way, if exception propagation is not stopped, all coroutines in the hierarchy will be cancelled. 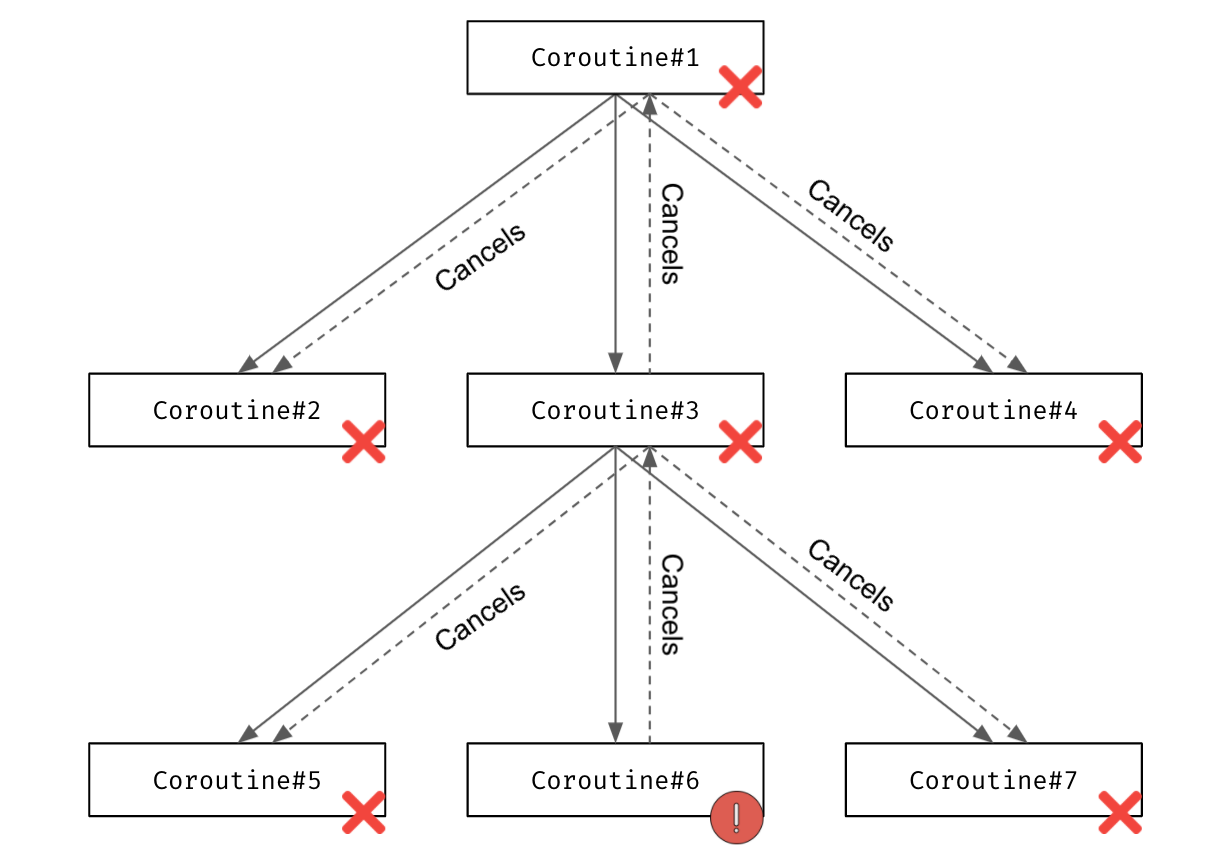 Catching the exception before it breaks a coroutine is helpful, but after that, it is too late. Communication happens via a job, so wrapping a coroutine builder with try-catch is not helpful at all.

The most important way to stop coroutines from breaking is by using a SupervisorJob. This is a special kind of job that ignores all the exceptions in its children. 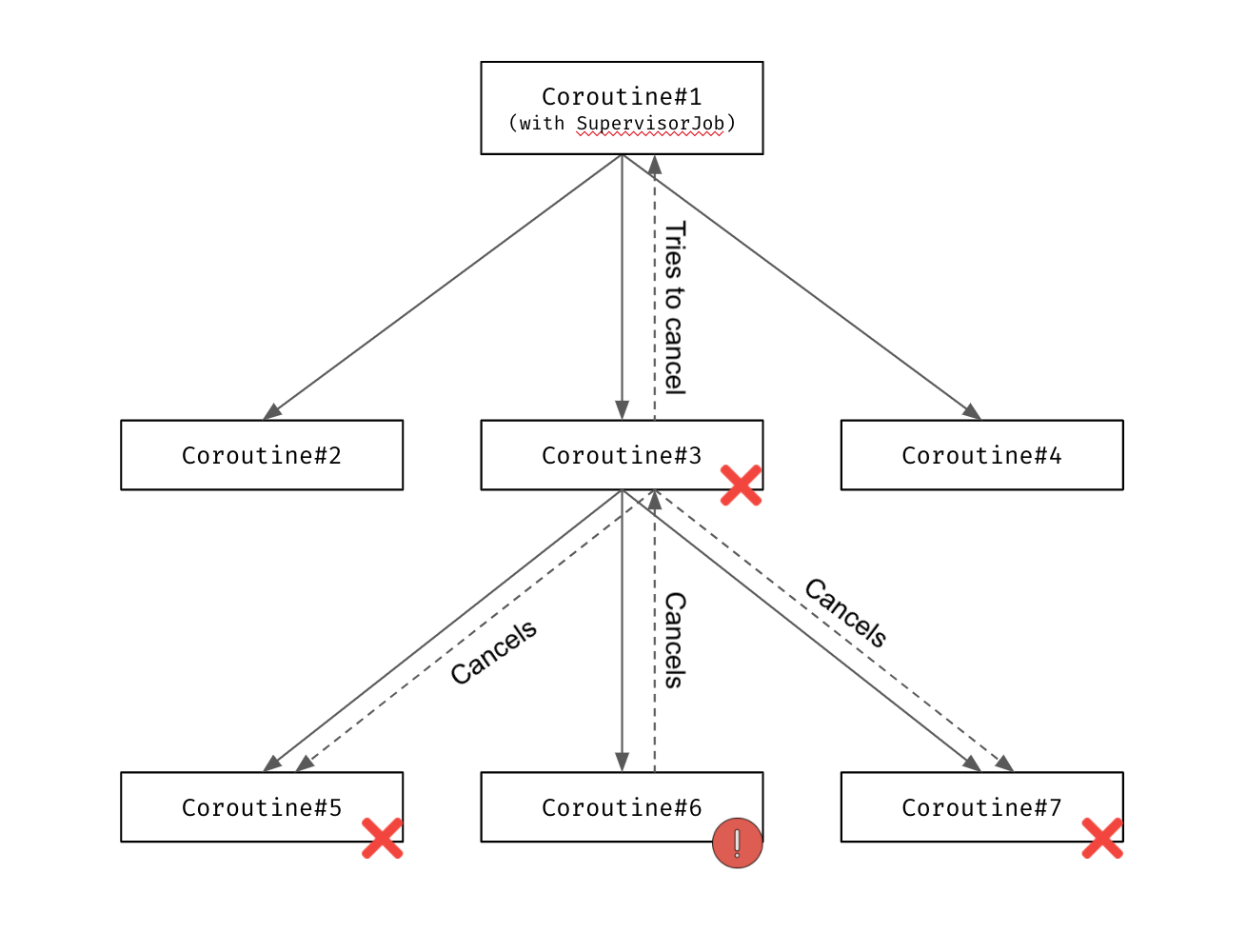 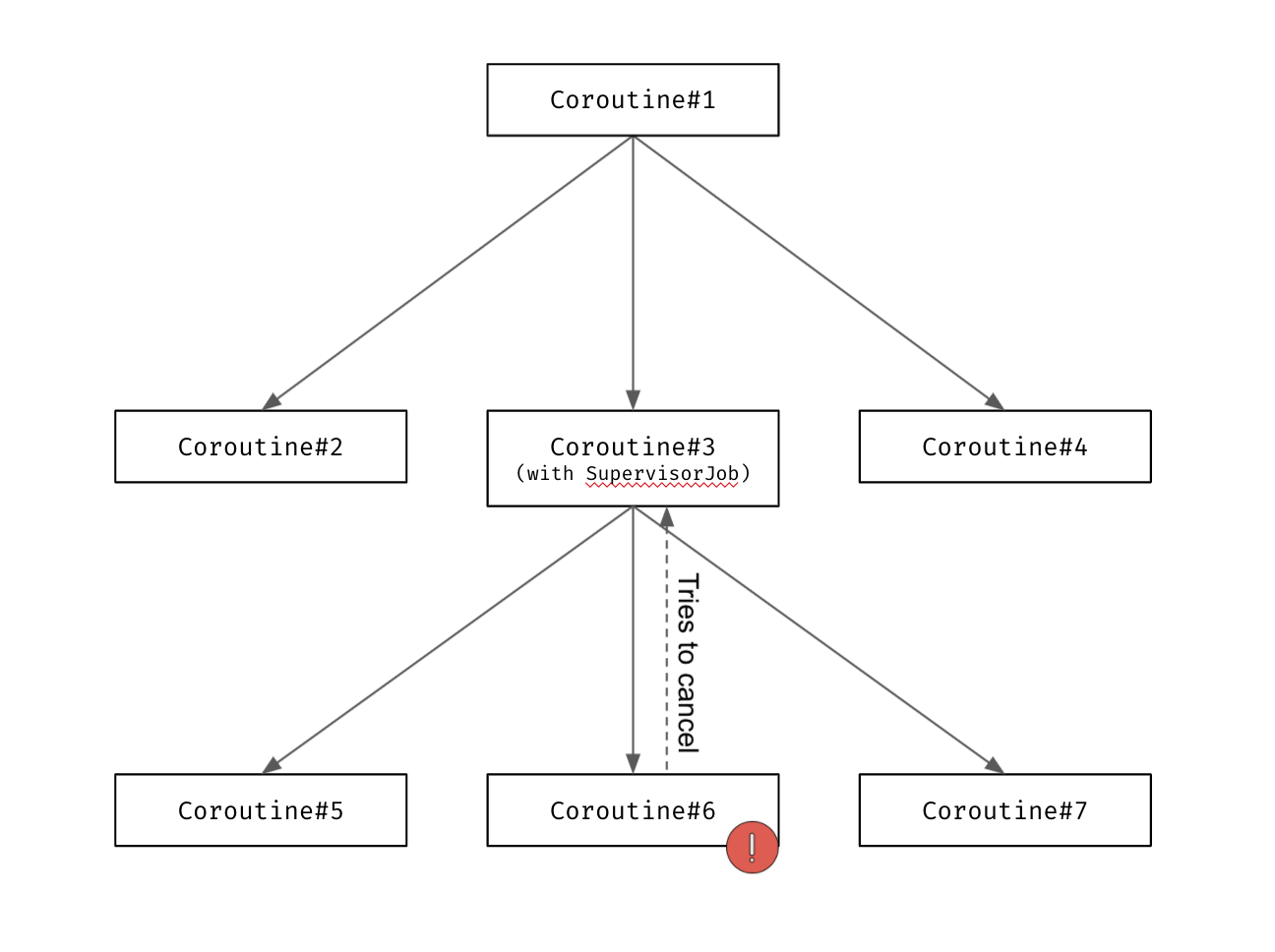 It is generally used as a part of a scope we start multiple coroutines on (more about it in the chapter Constructing coroutine scope). 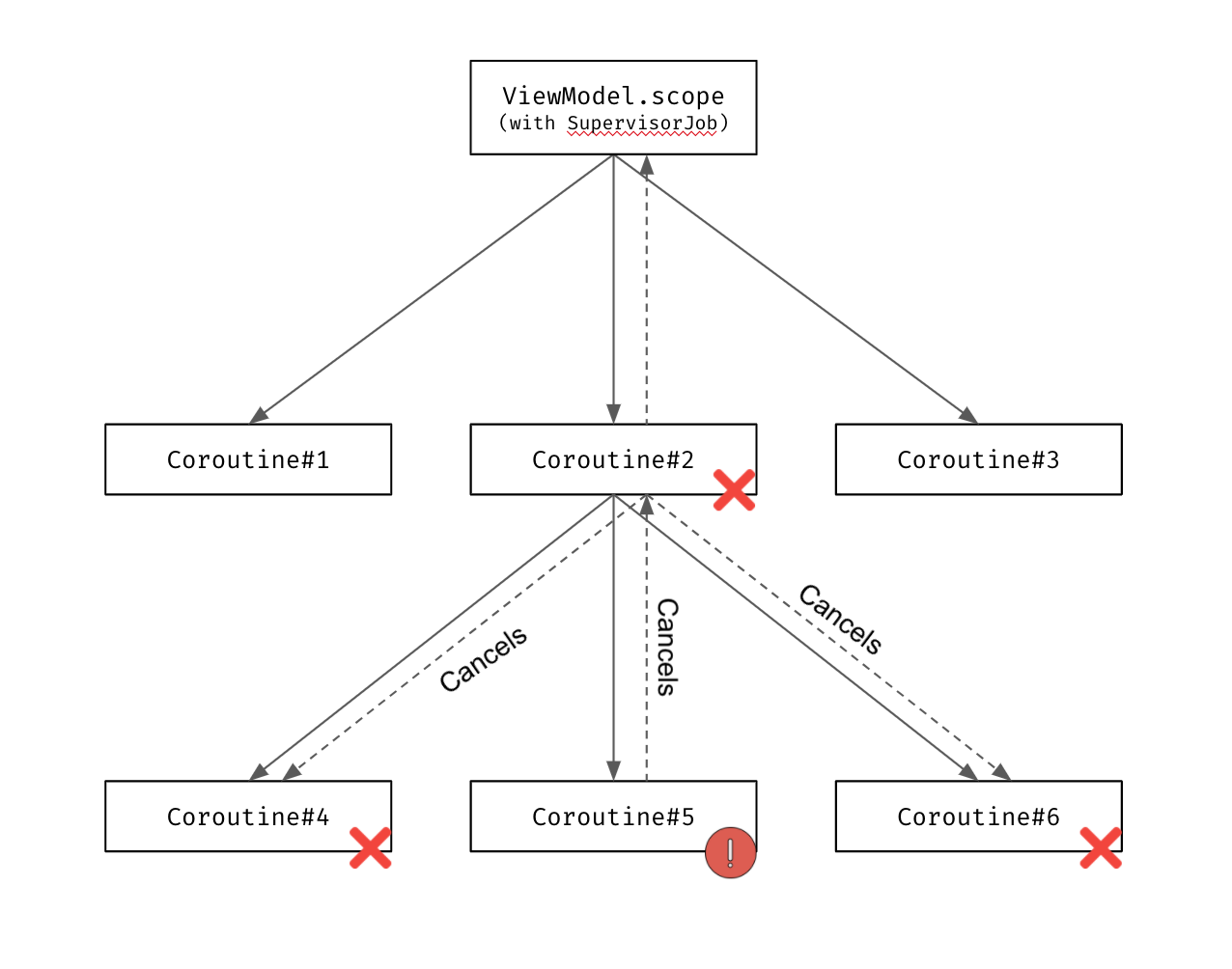 A common mistake is to use it as an argument to a parent coroutine, like in the code below. It won't help us handle exceptions, because in such a case SupervisorJob has only one direct child - the launch that received it as an argument. So in such a case, there is no advantage of using SupervisorJob over Job (the exception in both cases will not propagate to runBlocking, because we are not using its job).

It would make more sense if we would use this job as a context for multiple coroutine builders. Then each of them can be cancelled, but they will not cancel each other.

Another way to stop exception propagation is to wrap coroutine builders with a supervisorScope. This is very convenient, as we still keep a connection to the parent, and yet an exception from the coroutine will be silenced.

Another way to stop exception propagation is to use coroutineScope. This function, instead of influencing a parent, throws an exception that can be caught using try-catch (in opposition to coroutine builders). It will also be described in the next chapter.

So we know how to stop exception propagation, but sometimes it is not enough. The coroutine builder async, in case of an exception, breaks its parent just like launch and other coroutine builders that are in relation to their parents. Although what if this process is silenced (for instance using SupervisorJob or supervisorScope) and await is called? Let's look at the following example:

We have no value to return since the coroutine ended with an exception, so instead the MyException exception is thrown out of await. That is why MyException is printed. The other async finishes uninterrupted, thanks to the fact that we use the supervisorScope.

CancellationException is not propagating to parent

When dealing with exceptions, sometimes it is useful to define default behavior for all of them. This is where the context CoroutineExceptionHandler comes in handy. It does not stop the exception from propagation, but can be used to set what should happen in case of an exception (by default it is printing the exception stack trace).

This context is useful on many platforms to add a default way to deal with exceptions. For Android, it is often informing the user about the problem by showing a dialog or an error message. On the backend, it might be responding with an exception (it is most often handled by the framework).

Exception handling is an important part of the kotlinx.coroutines library. Over time, we will inevitably be getting back to those topics. For now, I hope that you understand how exceptions propagate from child to parent in basic builders, and how they can be stopped. Now it is time for a topic that is strongly connected, and also long-awaited. Time to talk about coroutine scope functions. 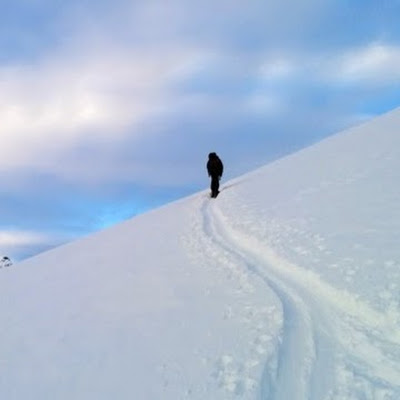