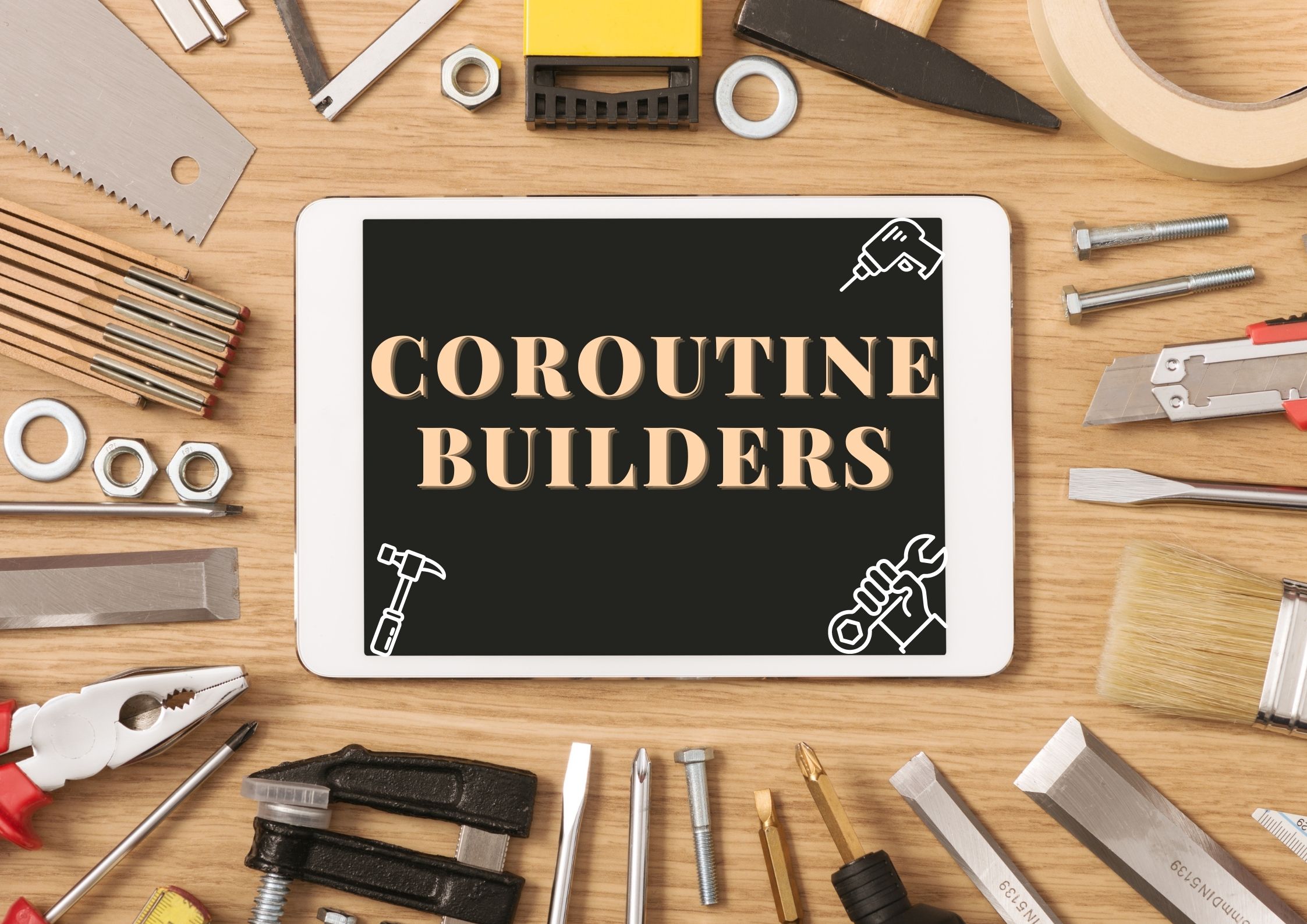 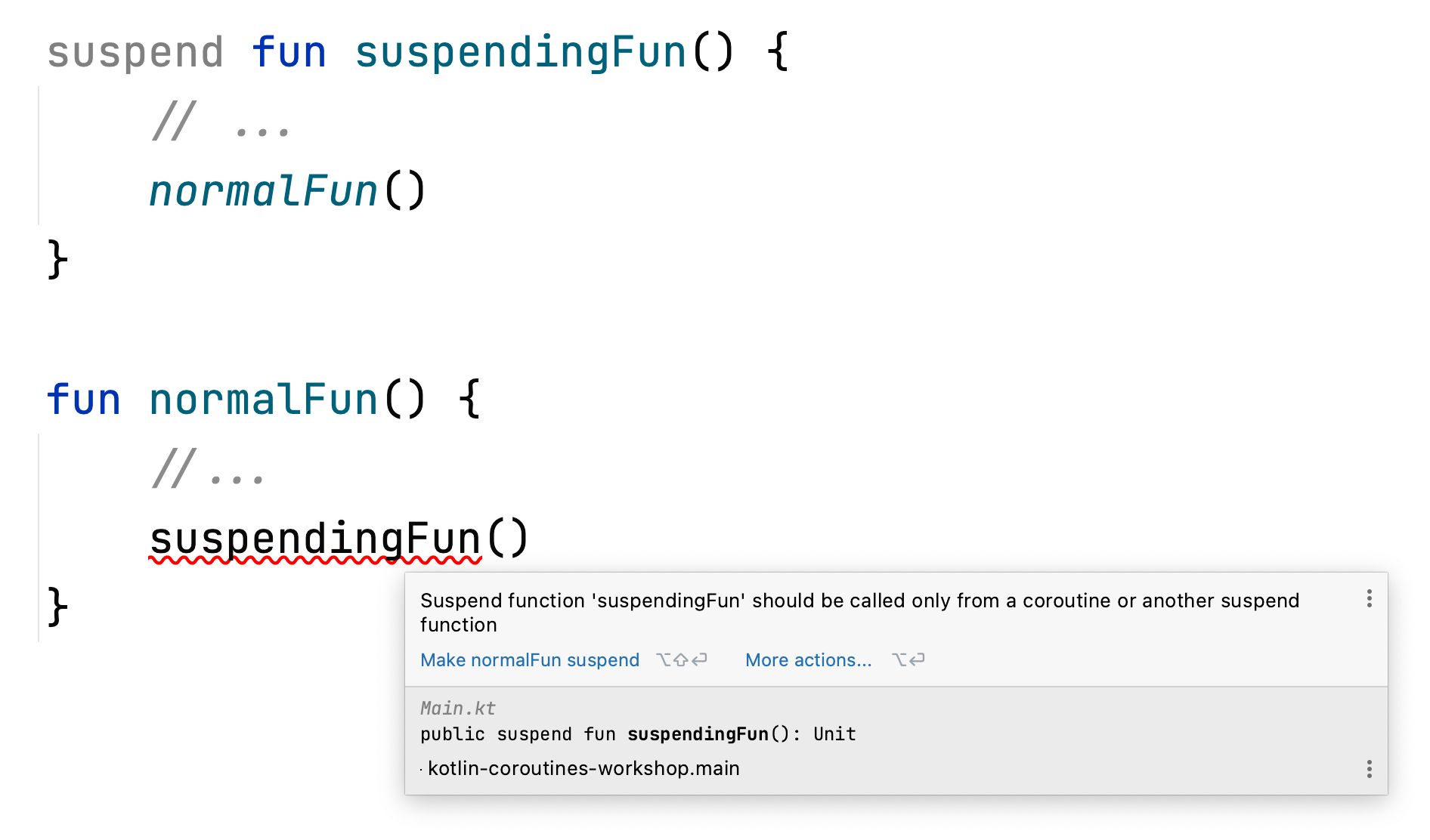 There are three essential coroutine builders provided by kotlinx.coroutines library we are going to explore:

Each has its own use cases. Let's explore them.

The way how launch works is conceptually similar to starting a new thread (thread function). We just start a coroutine, and it will run independently. Like a firework that is launched into space. This is how we use launch - to start some process.

The launch function is an extension function on the interface CoroutineScope. This is a part of an important mechanism called structured concurrency, with the purpose of building a relationship between parent coroutine and child coroutine. Later in this chapter, we will learn about structured concurrency, but for now we will avoid this topic by calling launch (and later async) on GlobalScope object. This is not a standard practice though - in real-life projects we should rarely use GlobalScope.

Another thing that you might have noticed, is that at the end of the main function, we need to call Thread.sleep. Without it, this function would end immediately after launching the coroutines, so they wouldn't have a chance to do their job. It is because delay is not blocking the thread, it is suspending a coroutine. You might remember from the chapter How does suspension work?, that delay just sets a timer to resume after a set amount of time, and suspends a coroutine until then. If the thread is not blocked, nothing is busy, so also nothing stops the program from finishing (later we will see, that if we use structurred concurrency, Thread.sleep is not needed).

To some degree, the way how launch works is similar to a daemon thread2 but much cheaper. This metaphor is useful at the start, but problematic later. Maintaining a blocked thread is always costly, maintaining a suspended coroutine is almost free (as explained in the chapter Coroutines under the hood). They both start some independent process and need something that will stop the program from ending before they are done (in the below example it is Thread.sleep(2000L)).

The general rule is that coroutines should never block threads, only suspend them. On the other hand, there are cases where blocking is necessary. Like in the main function, we need to block the thread, or otherwise our program will end too early. For such cases, we might use runBlocking.

runBlocking is a very atypical builder. It blocks the thread it has been started on, whenever its coroutine is suspended3 (similar to suspending main). This means that delay(1000L) inside runBlocking will behave like a Thread.sleep(1000L)7.

We might use it in our launch example, to replace Thread.sleep(2000) with delay(2000). Later we will see that runBlocking is even more useful once we introduce structured concurrency.

runBlocking used to be an important builder, but in modern programming, it is used rather rarely. In unit tests, we often instead use its successor runBlockingTest, which makes coroutines operate on a virtual time (a very useful feature for testing, we will describe it in the chapter Testing coroutines). For the main function, we often make it suspending.

Suspending main is convenient, but for now, we will keep using runBlocking4.

The async coroutine builder is similar to launch, but it is designed to produce a value. This value needs to be returned by the lambda expression5. async function returns an object of type Deferred<T>, where T is the type of the produced value. Deferred has a suspending method await, that returns this value once it is ready. In the below example, the produced value is 42, its type is Int, so Deferred<Int> is returned, and await returns 42 of type Int.

Just like the launch builder, async starts a coroutine immediately when it is called. So it is a way to start a few processes at once and then await their results together. The returned Deferred stores a value inside once it is produced, so once it is ready, it will be immediately returned from await. Although if we call await before the value is produced, we are suspended until the value is ready.

The way how the async builder works is very similar to launch, but it has additional support for returning a value. Someone might replace all launch functions with async, and the code would work fine. Don't do that! async is about producing value. If we don't need to, we should prefer using launch.

async builder is often used to parallelize two processes, like obtaining data from two different places, to combine them together.

If a coroutine is started on GlobalScope, the program will not wait for it. As previously mentioned, coroutines are not blocking any threads, and nothing is preventing the program from ending. This is why in the below example, additional delay on the end of the runBlocking needs to be called if we want to see any "World!" printed.

Why do we need this GlobalScope in the first place? It is because launch and async are extension functions on the CoroutineScope. But if you take a look at their and runBlocking definitions, you will see that the block parameter is a function type with receiver on the same interface CoroutineScope.

This means, that we can get rid of the GlobalScope, and instead launch can be called on the receiver provided by runBlocking by this.launch or simply launch. As a result, launch becomes a child of runBlocking. As parents might recognize, a parental responsibility is to wait for all its children, so runBlocking will suspend until all its children are finished.

A parent provides a scope for its children, and they are called on this scope. This builds a relationship that is called a structured concurrency. Here are the most important effects of the parent-child relationship:

Suspending functions need to be called from other suspending functions. This all needs to start with some coroutine builder. Except for runBlocking, builders need to be started on CoroutineScope. In our simple examples, the scope is provided by runBlocking, but in bigger applications, it is either constructed by us (we will explain how to do it in the chapter Constructing coroutine scope) or provided by the framework we use (for instance Ktor on a backend or Android KTX on Android). Once the first builder is started on a scope, other builders can be started on the scope of the first builder, and so on. This is in essence how our applications are structured.

There is one problem though: What about suspending functions? We can suspend there, but we do not have any scope. Passing it as an argument is not a good solution (as we will see in the chapter Coroutine scope functions). Instead, we should use coroutineScope function, that is a suspensing function crating a scope for builders.

Imagine, that in some repository function, you need to asynchronously load two resources, for example user data and a list of articles. Then you want to return only those articles that should be seen by the user. To call async, we need a scope, but we don't want to pass it to a function6. To create a scope out of a suspending function, we use the coroutineScope function.

The second async does not need to be used - without it, articles and user would be requested concurrently anyway. I decided to keep it, to make this example more readable (to highlight that those two requests happen asynchronously).

coroutineScope is a standard function we use when we need a scope inside a suspending function. It is really important. The way it is designed is perfect for this use case, but to analyze it, we first need to learn a bit about context, canceling, and exception handling. This is why the function will be explained in detail later, in a dedicated chapter (Coroutine scope functions). 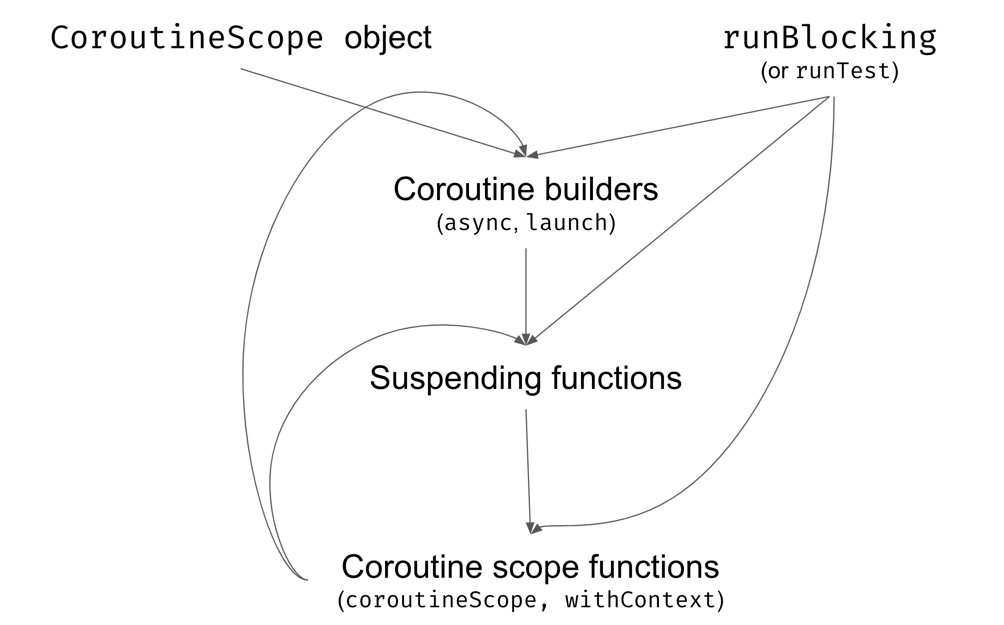 This knowledge is enough for most Kotlin coroutines usages. In most cases, we just have suspending functions calling other suspending or normal functions. If we need to introduce concurrent processing, we wrap a function with a coroutineScope and use builders inside. Everything needs to start with some builders called on some scope. We will learn in later parts how to construct such a scope, but for most projects, it needs to be defined once and is touched rarely.

Even though we learned the essentials, there is still a lot to learn about. In the next chapters, we will dive deep into coroutines. We will learn to use different contexts, how to tame cancellations, exception handling, how to test coroutines, etc. There are still a lot of great features to discover.

It can also start from suspending main, but even though we use it a lot in examples, it is not helpful when we write Android or backend applications.

Daemon thread is a low-priority thread that runs in the background. Here I compare launch to the daemon thread because both do not stop the program from ending.

To be more precise, it runs a new coroutine and blocks the current thread interruptibly until its completion.

The reason is that runBlocking creates a scope while suspending main does not if we don’t use the coroutineScope function, which we will introduce later.

To be strict with wording, by the argument of a functional type placed on the last position.

In the chapter Coroutine scope functions, we will explain in detail why.

Using dispatcher we can also run runBlocking body on a different thread. In such a case, the thread on which this builder has been started will be blocked until the coroutine is done. 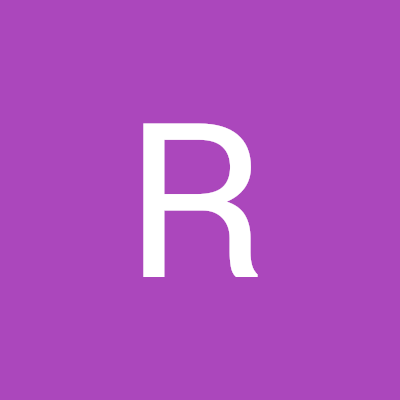 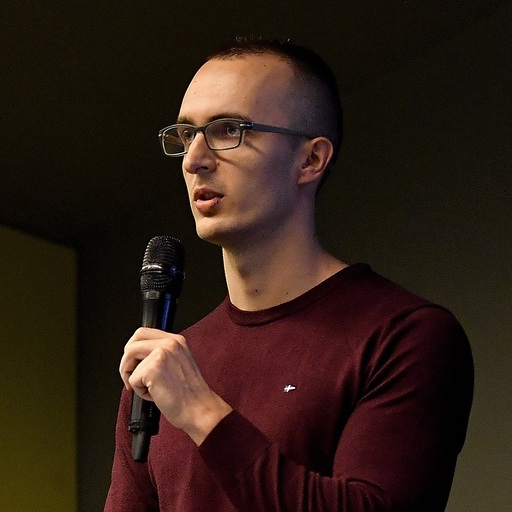